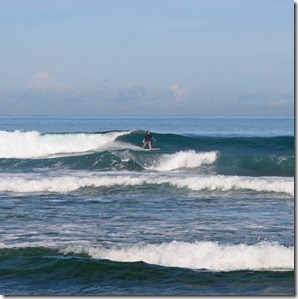 Sawarna is about as close as you could hope to get to a hidden, tropical surfing paradise these days, without a boat and a lot of time on your hands. We’ve been here seven days, and the longer I stay the more I fall in love with the peeling left hand reef/point break, the expansive sandy beach, and the lush jungle  cliffs with families of monkeys swinging from the tree tops. There’s nothing quite like sliding quickly down the face of a gently curling head high wave, watching the coral stream by beneath clear blue water. The long beach is a great place for walks, offering much to explore including a bat cave, monkeys, and fascinating rock formations. And the ever changing sky is constantly beautiful from sun up to sun down.

Admittedly it isn’t all wine and roses. The wind picks up mid to late morning which blows out the surf. There is also a bit of trash lying around, which the villagers sometimes burn, but the beach is substantially cleaner than Cimaja, where paddling through garbage to get to the lineup is fairly common. And the break here is good, although it’s not the barreling world class waves of Bali. The wave tends to section or close out in spots. We’ve mainly surfed the inside section of the reef. There is a good rip current just in front of the boat launch (pictured below), which is handy for paddling out to the inside spot. For the outside spot you walk farther out the point to the southeast. Additionally there is a beach break to the west. It was only surfable two of the days we were there, but it can be fun on smaller days, otherwise it’s just shore pound. 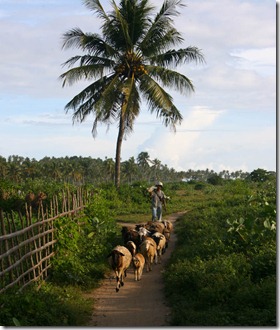 The village gets by on rice cultivation, fishing, and income from homestays, of which there are at least three. Apparently the kepala desa (village leader) used to make and sell electric guitars and was somewhat renown, but we haven’t met him or seen his trade save for a few old pictures and some derelict, half finished guitars, so I assume he has retired or passed away. The people here are exceedingly friendly for the most part, and we haven’t had any of the problems with theft or localism that were mentioned online. The food is also delicious, although one can get tired of rice and fish twice a day. We’ve also had no trouble with illness despite the primitive facilities (the only toilet/bath is a traditional kamar mandi consisting of a basin of river water and what amounts to a hole in the floor). 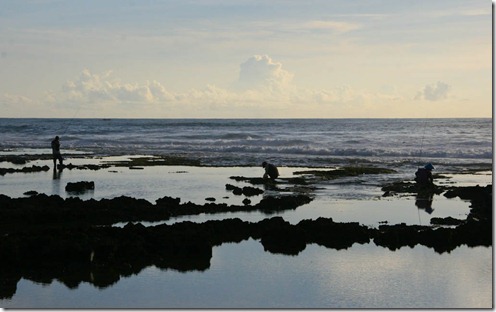 On the fifth day of our stay here we were visited by a local school teacher who was interested in practicing his English and he invited us to visit his school. So the next day we rode ojek with him and his son to the nearby town of Bayah where we met with a group of giddy high schoolers. We talked about our trip and our home and asked the students about their lives and hobbies. At one point we were entreated to sing for them, so Jen sang “Alpha Beta Parking Lot” and “Adventures in Solitude” while I played along on a very out of tune guitar.

The pace of life is slow here. We only keep time by the singing from the local mosque. Our ten day stay has been, by far, the most relaxing part of our travels. However, we’ve plowed through all of our books, and with only three hours a day spent in the surf, there is only so much sketching, writing, and Settlers of Catan a person can take. So in the end, despite being in love with Sawarna, we’re looking forward to our return to Cimaja. 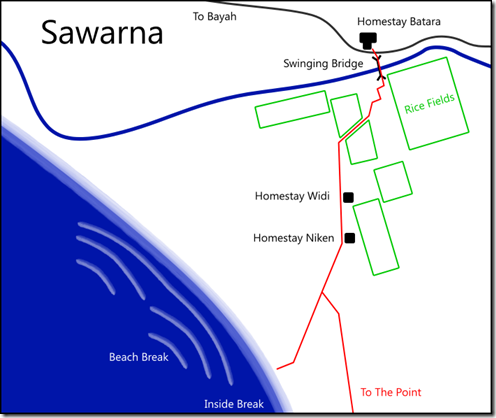 In case some of you found this page while searching for information on traveling to Sawarna, here are some more details for you. Sawarna is in the Banten Province on the Island of Java. If you’re looking on Google Maps search for Ciantir. It is probably about a 6 hour drive from Jakarta to Sawarna. There are roads approaching from both the east (Cimaja/Cisolok area), and the west (Bayah). The roads from the west are better, but you have to get to Bayah first. Transport can be arranged by speaking to the resorts/hotels/hostels/losmen in the Cimaja/Cisolok region. Prices will be between 400K and 600K rp.

The trail to the surf spot is conspicuously marked by the swinging bridge pictured above. The hike out to the surf spot is about 1 kilometer to the inside break, or 1.5 kilometers to the point. The locals will be happy to take you out there with your boards by ojek for the usual rate (20K rp), although the ride over the swinging bridge is a bit harrowing. The bottom is coral/rock at both the inside break and the point. The inside was mostly waist deep in the wipeout zone, and so we never had any cuts or scrapes. However I heard people describe the the point as being a bit more dangerous, and I never surfed it so I can’t say. The beach break has a sandy bottom and has potential as a beginner spot, however it was hollow closed out and unsurfable most of the time, so don’t count on it. Sawarna tends to be bigger than Cimaja on the same swell, so keep that in mind too.

I stayed at Homestay Batara which is the big house across the street (incquire at the cafe right next to the bridge). The rooms there are upstairs, have locks, and are quite secure. The family is very kind and hospitable, although their English was limited, so be sure to learn some Indonesian before you go, or bring a phrase book. Meals are include and the daily rate there (and, I think, at all the homestays) is 120K rp. per person per day. As I said, the facilities are primitive. Limited drinking water is provide, but I recommend bringing a few gallons as a reserve, or having a filter, and bring your own toilet paper. The bat cave & monkeys are a 2 kilometer hike to the west along the beach, and include wading across the river mouth. You can also have the locals take you via the road by ojek. If you have any more questions don’t hesitate to use the Contact page, or go to Pondok Kencana/Ombak Tujuh in Cimaja and ask Leo. Tell him the crazy American with the longboards sent you.