In addition to health precautions such as showering at least once a month, sailing the open ocean requires constant vigilance against Sea Madness. At least, that’s what the Voices say. So to put you all at ease about our mental health, here is a rundown of how we’ve remained masters of our sanity, and of a few other people’s as well.

Captain Red Beard (a.k.a. Ahab) has focused on the sailing aspect, especially using our new spinnaker. His love for it goes beyond flying the sail during the day; he’s started sleeping with it in his lee cloth. We only barely talked him out of flying it inside the cabin. To counter his disappointment, he has taken to fishing. Not only does he keep lines out all day, but he started hallucinating fish chasing behind the lures that no one else could see. In between watching them he scrubs imaginary scales from the cockpit, which seems to be prep for lighting a large bonfire made solely of beer bottles. We tried to tell him there were no scales or swimming fish, but we haven’t had the heart to break it to him that the cockpit seat is not an imu pit.

Noge the Sandwich also plays fishmonger by checking on the lines constantly and trying to change out the lures every 5 minutes. With the lack of fish to eat he’s resorted to calling all food sandwiches. Alternately he suggests that we put all dinner leftovers in omelets the next morning. The taco meat tasted great, but we had to draw the line at spaghetti. This led to more use of his favorite phrase, “I can throw myself on that grenade,” to indicate that he wants eat up excess food after meals. However, after too many repetitions he seems to be convinced that the boat is actually covered in grenades. Needless to say, he’s become a bit twitchy, and also insists on being called Lord Sandwich. We’ve tried to placate him with plenty of reading material, but he may just be eating the books. That would explain why no one’s seen Scrotty Jon’s Kindle since he shared it..

Machete Jen is doing well by referring to herself in the third person. Since she stowed every single last food item in the entire boat, she is the only one who knows where all the ingredients are come mealtimes. It became clear that the sheer volume of information was overwhelming the first time someone asked where some food was. She suddenly went bug-eyed and wisps of smoke began drifting out of her ears. As a result we’ve been eating whatever random things she pulls out, such as last night’s meal of salami, five dried apricots and a can of corn. While that may seem like an odd grouping, it was far better than the canned clams, peanut butter crackers, and mayonnaise combination we had last week. Don’t even ask about the thing with the non-dairy creamer.

Scrotty Jon stays mentally fit by conversing with his newest friend Frank, who is a large purple conch. At least, that’s our best guess based on his nightly serenading. In their many adventures, he sings of sailing to the Pacific garbage patch and conquering it for his own. We think this may be a reference to the salon table, or possibly the drawer of serving spoons. The cat has been avoiding him since he called her Sir Furry Pants and tried to put origami hats on her head. He still thinks of Zara as his minion and snacks on her kibbles when he thinks we’re not watching. Frank apparently insists that he play music most of the day as a tribute to King Triton. We don’t mind him acting as DJ, but refuse to let him strap the pole spear trident on his left fist. Instead he taped on a mound of gummy cherries which he ritually washes in salt water every morning.

As you can see, we’re all in great shape mentally. Now that we’ve assuaged your fears about that, it’s time to await the arrival of the swallow/seabird that brings the coconut deliveries. Allons-y!

This morning our distance from Hilo and main land US were the same, so that makes it Halfway Party Day! We are officially more than a thousand miles from anywhere, which is about as lonely as you can get sailing on the oceans of this planet. The past few days have emphasized this solitude; after catching our first fish we saw no other signs of life for several days. Recently a white seabird circled us on a few occasions. But there have still been no radar contacts besides the rain showers that sometimes pass through.

Coming up with something notable to post about has been a challenge. Our journey has been an exercise in averages. Sometimes there’s a little more wind, sometimes less. Sometimes the swell is mellow, sometimes more rocky. We eat, nap, play cards, and listen to music. Our supply of fresh produce is slowly diminishing, and we’re making similar headway on our reading materials. Amidst that routine sameness, simply spotting some flotsam in the water can be the highlight of a day.

This mundane state is still much better than the alternative of things going wrong. So far we’ve never hit true extended doldrums or storm conditions. Our list of broken gear is limited to a rip in an outdoor cushion and a shackle that simply needed to be bent back into shape. And despite the spotty rain showers of the last few days, the weather is trending warmer and clearer. Night watches now come with nearly uninterrupted moonlight and the daytime skies have turned mostly sunny and as blue as the sea.

Tonight we’re planning a victory feast of pizza and other treats to celebrate our progress. The forecast ahead looks like more of the same good weather as we slowly traverse the remaining miles. Stay tuned for exciting reports of the sea madness we definitely don’t have, and continued SPOT tracker posts from whatever time zone we decide to be in. Seriously, we have no idea what longitudes officially mark the zone borders, and we mostly don’t care 🙂 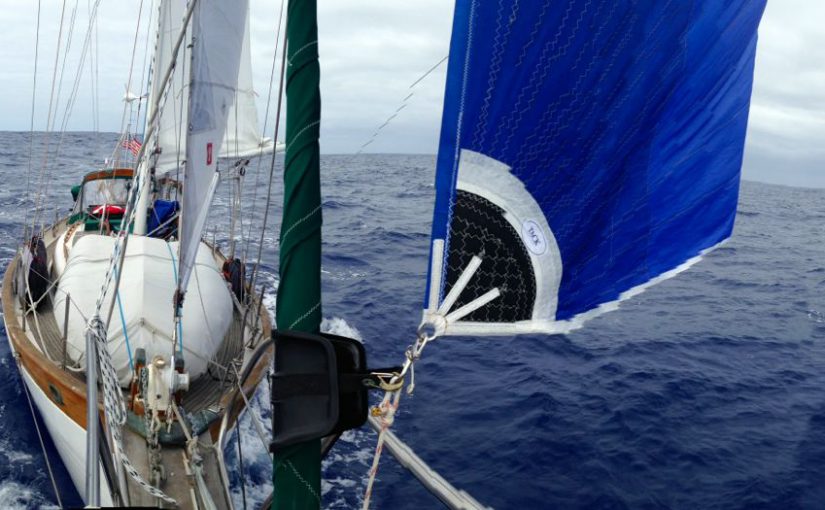 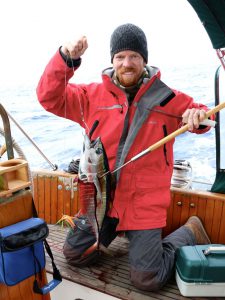 We’ve hardly been offshore a week, but it feels like much longer. Watch schedules break up the sleeping hours into more “nights” than there really are. The routine cycles on, and the sea stays unchanged: vast, rolling swells of deep cerulean blue. Outside of our instruments there are no visual cues to delineate our progress. We could as easily be 50 as 500 miles from land. The idea that people are awaiting word of our lives makes it less empty. News is more fun when shared: ‘Can’t wait to tell everyone we caught a yellow fin tuna,’ and ‘The lee cloth sewing turned out really well.’ The simple act of sending the OK message on the SPOT tracker brings a flicker of tangible connection; when the light indicates the message was sent I can clearly imagine the expectation and joy it brings to the people I care about. Moments like that are our best contact with humanity since we have not seen another ship or an airplane for several days, even just on the radar. The moral of the story: We’re having fun but are thinking of you, dear reader.

Well, we are less than a week away from our arrival in Hawaii and we’re starting to plan the next leg of our journey (editors note: actually we are now in Hilo, as of the time of this posting). We intend to depart Hilo headed for the Marquesas on June 10th (weather permitting). Average passage time is 3 weeks, and it’s a good idea to add at least a week if not two in order to allow for weather conditions (i.e. we could delay our departure date due to weather). We have space for one or two crew members, and the only cost would be your airfare and a share of the food & fuel. This will be be a challenging passage across the equator with a mix of upwind sailing in the trade winds and crossing the ITCZ (doldrums w/ squalls), so be ready for an adventure! Anybody who does the passage with us is welcome to spend as much time as they like on the boat once we’re in French Polynesia. No sailing experience is needed, and as long as we have a common acquaintance I’ll trust that you’re not secretly an axe murderer. If you’re interested, please email me using my sat phone email which is my FCC call sign at sailmail.com. My FCC call sign is WDF7269. (While we are in Hilo I can also be reached at my personal email, or via this blog’s contact form).